s post, Facebook and other anti-social networks, I’ve proclaimed to not use social media for a month. The point is to see what I actually missed and draw some kind of conclusion.

My expectations where receiving summary mails and missing out on some stuff in real life since people already shared it on a social network. Far less for missing out on really important information, since I do think that good information can be read elsewhere as well (like blogs, informational sites, traditional forums).

While 1 week shy of a month, I do think I have seen enough to reach my personal verdict on this.

While I was gone..

Within the time I was gone, I’ve got the following amount of clawing from the dark side:

On Facebook, I missed 75 notifications, 7 group updates and 3 close friend updates and 4 pokes.
Of all those notifications and updates, 1 was noteworthy since something happened in my family and 1 was a photo I was tagged in. The rest: mostly garbage and the odd notification of a blog I sometimes read. Changes needed.

Actually, this wasn’ t bad at all. And I didn’t miss much as well, since most people I follow don’t really have a post-per-day religion.
No changes needed.

Not bad at all as well. Nice mail with the short low-down updates, not much fuzz. No changes needed

Arguably the most useless social network I am on. Short of deleting my account, I will turn off all communication.

Did you miss it?

To be fair: I didn’t miss it at all! Just like biting nails, reading postings from social networks can be as much as a habit as well. A time consuming one as well, depending on the amount of friends and networks you have. And I didn’t see as much of social network related talk in regular ” offline” conversations as well, so peer pressure is not a problem. But then again, I don’t have the illusion hordes of people are waiting for me to post something either 🙂

I found that the most annoyingly intrusive social network remains Facebook. And not just the mails, quite a few apps and services use a Facebook login to work. This can be a bit of a hassle when you mostly use a mobile phone. I will think about this one, maybe better to just create specific accounts or use OpenID, if possible.

So I could go on and delete the FB-account. But then again: It is the most popular social network and there might be some offline scenarios where I would be excluding myself from “the loop”.
I think it is better to make some adjustments, like unfriending, grouping more, gagging the usual chainpost spammers etc. Until the next best thing comes along or my disdain for Facebook grows further.

I think Twitter is the most useful one, due to it’s open, direct and more simplistic approach.
I take it really works well for a lot of people, not just for complaining about services rendered from certain companies. Same could be said for G+, but it just isn’t that popular and open, despite all it’s features and laid-back attitude.

Instagram is just the same as Twitter basically, with a different focus towards the (audio-)visual. And Pinterest… ah well. I’ll see if I keep my name as a placeholder or delete my account there. 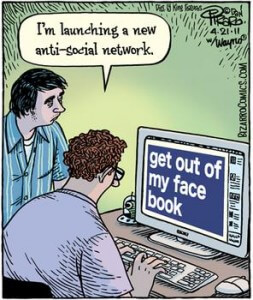 I will maintain presence in the online social arena, but partaking in it: not so much. That’s right, I won’t post cute cats, movie stuff or that kind of thing outside of my blog. And reading a lot less as well, rather read more books. I haven’t read nearly as much as I did on our holiday and I really should. In the meanwhile, I will be tracking interesting developments around new networks, the more ad-free and pro-privacy kinds, unlike any of the mentioned networks.

But let’s stay in touch on the above networks, or better yet: enjoy a life offline 😉