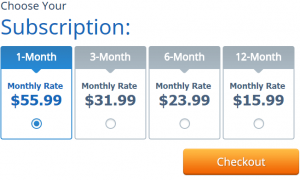 As you might know, I’m an IT-guy and thus I need to update my certifications and skills regularly. There are a couple of routes to go and it depends on the goal and my own knowledge which one I’ll take.
One of them is self-preparation before I actually take an exam, by the means of a test exam with software to go with it. In my case Avanset’s VCE Exam Simulator, which I once bought. But lately, it has become worthless. Why? Avanset (a subsidiary of Certplex Ltd) has decided to follow a new and aggressive pricing strategy, as illustrated on the left.

On top of that, with introducing their new subscription based tooling, they updated the tools and all the exams on associated and owned websites, they cannot be run with versions prior to the new VCE 1.2 programs.
This forces on a subscription, even onto previous buyers. And don’t get me started on their Premium service, for which you have to dish out at least $359 per year for their VCE files.

So they went from free to an absolute stupendous pricing strategy within a couple of months, even bitch-slapping their existing customer base in the process. Well done for helping the competitors this way 🙂
Because I really despise this extortionist approach, I decided to put up a post about a viable alternative, which will cost you € 11,99 for unlimited use, is available on both your mobile and desktop of choice and even packs a lot more easy to use features.

The first two listed applications are the payed and unpayed version. You can easily use the unpayed version to decide if this approach works for you.
Within the A+ VCE player:

I highly recommend using Dropbox or Google Drive to store your preparation exams, so you will have acces to them on any device you run A+ VCE. All exams unavailable to older versions of the Avanset VCE player work fine so far!
Additionally, you can find various account and (app-)sync options in the BlueStacks settings section to your liking.

So that’s it: An alternative with a combination of two apps that are actually a lot cheaper than using Avanset’s ridiculous subscription models and pack more usable options too. Talking about killing the goose with the golden eggs Certplex….